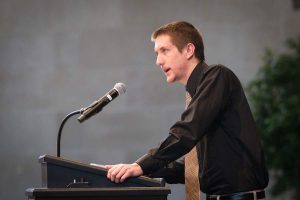 Children, for all their naiveté, are particularly astute. They are credulous when it comes to certain matters, yet they ask very difficult and honest questions. Above all, children ask questions that begin with the pesky word why. “Why is the sky blue?” they think. “Why do trees lose their leaves in the fall?” they wonder. Or, a much more typical one in my household, “Why do you always burn the frozen pizza, ma?” Anyways, children’s demands for causal knowledge—and their restlessness in the pursuit of it—never cease to catch us off guard.

But now, there comes a day when children fail to receive a satisfying answer to one of their questions or when they are given two seemingly mutually exclusive answers to the same question. At this point they begin to get a feel for the meaning of the word truth. Something inside tells children, perhaps now teenagers, that certain ideas are more intellectually satisfying than others. After some such experience, these older children start to look for not just any answer, but for the right answer. They don’t cease to seek information per se, and in that sense they are expanding; but they do cease to acknowledge the validity of everything they hear, and in that sense they are contracting. Notice that this process of expansion and contraction is not arbitrary. Actually, it has a purpose: the apprehending of what is true.

This idea is a bit of a paradox. Like a beating heart, we expand in order to contract. Without the expansion, there would be no contraction. We broaden our knowledge precisely in order to narrow it. It is as if we are sifting through the vast array of possible explanations available to us, but only certain explanations make it through the pores of our rational filter. This paradox is the very essence of a liberal arts education. For the rest of this speech, I’d like to share with you a few stories I’ve picked up from my time at Wake Forest that demonstrate this insight.

Let’s start way back with Socrates and the dialectical method of reasoning. Socrates is one of my personal heroes, not necessarily because he was right about everything but rather because of his approach to life. He was a rigorous pursuer of wisdom. His most famous ideas, written down by Plato, were not (like this one) expressed in long monologues or meditations: they were conversations. Socrates loved talking to people. He discussed philosophy with others in order to chip away at preconceived notions. Most of his conversations ended in confusion, without absolute certainty, but because of the perseverance of his disciple Plato, a handful of these dialogues did reach acceptable conclusions. Plato and Socrates knew all the arguments presented to them, but they only believed that certain ones were correct. They planted many seeds, but only a few of these seeds produced fruit. I hold that these two thinkers were college students par excellence: they aimed to move from many competing notions to one, to the type of notion that we commonly call “truth.” They expanded to contract.

Now consider the genius Rene Descartes, whose journey may more aptly be explained as a movement from expansion to contraction to expansion. Descartes, like Socrates, had a thirst for wisdom. As a young student, he took in the numerous possible explanations of reality that his scholastic professors offered him. However, these manifold accounts were not sufficient for him. Descartes wanted clear and distinct premises, indubitable premises. His expanding mind occasioned an abrupt narrowing. He questioned everything he had ever been instructed, but he did not question solely to question. He questioned for truth’s sake. His doubtful mentality constricted him at first, but he would later build upon the scant indubitable certainties with which he was left by the end of his skepticism to construct a formidable mathematical and philosophical methodology. Like the aforementioned child, Descartes was not content with dissonance: he wanted absolute clarity.

For a more contemporary example from my major, religion, let me share with you the ideas of Stephen Prothero, who came to speak to Wake Forest during my sophomore year. Arguably this scholar’s most famous work is God Is Not One, which, as the title implies, explains that the so-called eight major religions are, in fact, different. Dr. Prothero challenges the reader as if by saying, “Read this book, and you will see that these religions are not different paths up the same mountain. No. They are different paths up different mountains.” To the spiritual seeker, Dr. Prothero is the modern Socrates. He encourages the confused and the sure-footed alike to come to real conclusions, if there are any conclusions, by putting these major religions into conversation with each other. Dr. Prothero asks students to expand their views so that they can come to know what they may have formerly only believed. For brilliant minds, vagaries are not enough.

Now I’d like to share something more personal. Most of my research while at Wake Forest has consisted of analysis of competing models of economic development in Central America. At first for me these competing models were like the beliefs of children: vague and indiscriminate. My situation was similar to a statement by Juan Luis Segundo, a prominent liberation theologian: “I had many ideologies in front of me, as available in a shop window, and I could choose the one I liked.” And isn’t there a great temptation to be like a child who chooses the flashiest shoes in the shop only to later find that they don’t fit?  And isn’t there a great temptation to blindly trust the appealing preference of a well-known public figure, perhaps a certain successful basketball player from the 1990s? And isn’t there a great temptation to walk out of the shop without any shoes at all, as one who finds comfort in indecision? Without doubt, all these temptations weighed upon me. And without doubt, I pondered these forbidden fruits in awe of their apparent splendor. But! Taking a hint from the likes of Plato, Descartes, and Prothero, I broadened to narrow, for I have never been satisfied until pillars of truth are built in the midst of the rubble.

I trust that these movements of expansion and contraction are familiar to all, especially to those of us who have an inexhaustible hunger for wisdom. We continue to struggle for more knowledge so that we can dismiss the fallacies and accept the truths. The human mind is like unrefined gold, good in essence yet indefinite in form. A goldsmith passes it through fire. It stretches and hardens. Once a dull heap of rock, it is now a wedding ring to be given to the beloved. We are the same. Although full of potential and grounded in our goodness as dignified human beings, we remain dull until we pass through the fire of expansion and the cooling of contraction. We allow ourselves to be molded into who we are. It is a dynamic process, and it makes for challenging and restless nights as we seek that to which we are oriented. Despite these trials, we become like the wedding ring, a gift to be shared. But this gift is not any gift. It must be tested, and it must be true.