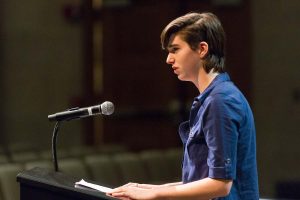 I can pretty much guarantee you that I spent college un-learning most of what I thought was absolute in grade school. These four years have been fraught with challenges to my worldview, ranging from additions to my personal knowledge of literature, to the complete overhaul of my understanding of social interactions. As it turned out, I became increasingly interested in language through these years, so I pursued not only my major language, Latin, but also Greek, Italian, Cherokee, and Sanskrit, which opened up new knowledge of grammatical structures, vocabularies, literatures, and systems of logic underlying those languages. As a student of liberal arts, I also pursued minors in linguistics and religion; the classes I took for these minors taught me to step back from the cultural contexts that I had been so meticulously learning to understand.

To begin to shed light on what I mean, I’ll give you the example of grammar. What I learned from elementary school on through high school was how to punctuate, spell, and build sentences and phrases. I learned the rules that linguists refer to as “prescriptivism,” but I also learned that to be considered educated, you needed to understand and deploy these rules at all times, that they were absolute rules. But in college, I learned about how language is actually used, how different rule systems can crop up to allow meanings which were previously difficult or impossible to impart through language, like y’all for the plural of you. I started to consider “descriptivism,” which is as close to objective a view of language as possible–instead of considering a word or sentence right or wrong, it is simply considered a sample of language, something which can allow us to understand better how language works.

Let’s look at a couple of examples of grammar as prescribed versus as it is used. First, one which can bother any English speaker who is aware of the subjunctive mood. For anyone who has temporarily forgotten, the subjunctive may have been the bane of your existence as you learned a foreign language like Spanish, Latin, or maybe Italian or French; using a verb with this form shows that an action is not definite, typically because it is hypothetical or possibly, but not definitely, untrue. When would we use the subjunctive, then? If you were trying to express, say, an “if” clause, you would use it. If you were a grammar nerd, you would have just now heard it in my speech. I am referring to that “were,” which so many people express as “was.” If I was concerned about the deterioration of the English language, I might correct this misuse as often as it occurs.

But I have no concern about the deterioration of the English language because it has been “deteriorating” since it existed. My only concern is that I use an appropriate form at an appropriate time. Context is my main concern, because depending on the physical, social, and chronological space I occupy, my context changes, altering what is appropriate. Further, my context as a young, college-educated, tall, white, middle-class woman from my family’s household in a rather rural region of Maryland, my personal context is forever distinct from all other individuals. I still cannot tell you all the ways it is different, nor can I exhaustively prove when or why that matters – but I can tell you that my context will absolutely have effects on the language I use, the ideas I express with that language, and the perception of that presentation.

Walking into a job interview is going to affect my presentation of self just as much as hopping into a car with my close friends. During my junior year here, I took a course on ritual studies. This course dug deep into defining and understanding rituals based upon scholarship by a range of authors in a range of chronological contexts. By the end of the course, the class learned to understand ritual as manifestation of social power structures, which brought us to understand how different aspects of context affect social interactions.

Essentially, we learned that certain actions within specific contexts serve to place individuals into a social system – for example, you know that I am a graduating student because of my attire, because I have been honored with a senior oration, because I will walk across the stage when my name is called to collect a diploma from the president of the university – these signals only make sense in this context, but in this context they are very clear. But you also know that I am an undergraduate, and for me to take on a role other than that would be confusing, silly, or potentially offensive–hence I am not going to, say, ask us to bow our heads in prayer in place of the chaplain.

All of our ritual actions are steeped in context, and, of course, language falls into that category of socially relevant ritual action. So context is the thing that matters. In grade school, you most likely were told that the correct way to tell someone about something necessary in the past is ‘should have’ rather than ‘should of.’ Yet, when you accidentally let fly a ‘should’ve’ or worse, an actual ‘should of’ in conversation your conversation-mates may not notice or even care. To write should of in a formal essay would still subject you to harsh criticism from others, a loss of credibility in general, or could exclude you from consideration for publication, or maybe a job you were applying for. However, the actual usage of the phrase often sounds like the prescribed mistake, so that only in the context of writing – and probably not in an informal setting – is the rule really important.

So, in moving forward, I think taking context into account is probably our wisest course of action. Remembering the rules we used to follow is important, but remembering how we fit into any given context is paramount. Refrain from judging every human by a single measure, and pay attention to context. To do so allows us to understand ourselves and others, and therefore sheds light on aspects of our world we might otherwise ignore. So be mindful of, or at least consider these things I unlearned in college.