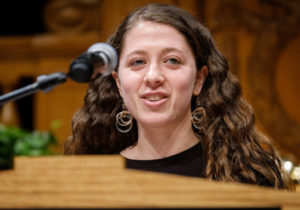 “Not a Place but a Purpose.” This was the title of my first speech. I wrote two speeches. In my first attempt, I discussed how, although we are leaving the physical space and will never occupy it in the same way again, we will always belong to Wake Forest and share our Pro Humanitate mission. It was a fine speech, but as I neatly concluded my thoughts, I knew it was a speech I would not give. It was safe and boring. It could not offend anyone; it invited its audience to a comfortable smugness. It was a self-congratulatory cushion, but its message would leave your mind as soon as you left your seat. So, I wrote a second speech. It is riskier, more dangerous, and more true. This is the second speech.

I call the fall semester of my junior year my Activist Awakening. I got to know some students who were involved in social justice work on campus, and they invited me to join them. Thanks to their willingness to include me, my entire perception of Wake Forest changed. It was in this time that I took my Women’s, Gender, and Sexuality Studies divisional with Dr. Gupta and learned more about the feminism I have always loved. I carried a sign and chanted through the streets of Washington, D.C., in the March for Black Women, and I learned so much about myself and others at BRANCHES, Wake’s Social Justice Retreat. These events were empowering and connected me to a community of Wake Forest students whose boldness and relentlessness continue to inspire me. These student activists also called me to more, leading me to the epitome of that semester: a trip to Nogales, a border city that spills into Arizona and Mexico. We gathered with other migration activists under the imposing shadow of the border wall.

I told my parents it was a conference about immigration. I was vague, knowing they would interpret this as something scholarly. It was not entirely untrue, but a more apt descriptor would be “protest.” Far from a sterile debate on migration issues, we rallied, we marched, we sang, we cried, and we screamed at the border wall between the U.S. and Mexico. An eclectic collection of earthy old hippies and young college dreamers, the SOA Watch was a time of coming together to peacefully demonstrate against U.S. imperialism and border control. It was so different from anything I had ever connected to Wake Forest. If not for the small activist community I met here, I would never have had the opportunity to go.

We returned to Wake with a renewed passion for justice. We held UndocuWeek to share with our fellow students the lessons we had learned and to create greater visibility for the immigrant community. This year we were officially chartered as SMIJ, the Student Movement for Immigration Justice. You might not have heard of us; we are new, and we are just getting started. Regardless of the tangible goals we have ahead of us, I am extremely proud to have helped create a structure so that students who come after us can accomplish so much more. There will always be more to do, especially now, but I am grateful to have played a small part in this mission in my time here at Wake.

Now I know that we here do not all agree on questions of documentation and citizenship. You may be thinking that this is not an appropriate forum for a political message, but that is why this speech is dangerous. I believe that it is impossible for us to remain neutral. My Wake Forest experience has taught me that everything we do, and critically, everything we do not do, is political. As lawyer and activist Aditi Juneja tweeted following the Charlottesville protests, “If you’ve wondered what you would’ve done during slavery, the Holocaust, or Civil Rights movement … you’re doing it now” (2017). This is not to say that we must choose one of two sides. Everything is a spectrum; each of us constitutes a unique assemblage of opinions and experiences that cannot easily be classified. I have mentioned students whose progressive justice work inspires me; I also have friends whose views are conservative, and they too embolden me and push me toward new depths of growth and self-awareness. I hope “to grow up” is not synonymous with “becoming entrenched in our views.” We have often been encouraged to converse with those who disagree with us; Wake Forest itself has promoted a “Call to Conversation” to this end. But we should not stop at conversation. Let us work to build relationships with others who are multifaceted and strange in ways we are not. We cannot afford to merely insulate ourselves with people whose thoughts mirror our own.

As I consider the Class of 2019, I see power. We believe different things, and we have experienced vastly different opportunities and privileges. We all now share the privilege of a Wake Forest university education. From here, we will all go on to make decisions that are life-altering, for ourselves and for others. Wherever we find ourselves as we leave Wake Forest, we will have the potential to inspire action. To change systems. To relieve oppression. But we will also have the potential to change nothing. To remain inert and comfortable. To perpetuate the status quo. For some of us, this is not an option. Pro Humanitate tells us not to hide from conflict or ignore discrimination because it does not appear to affect us directly. It is to all of us but especially to those who have never felt unsafe that I offer this challenge: let us not pretend that we can be unbiased. Let us embody our nuanced bundle of views and beliefs. Let us continuously challenge them, testing them against the realities we face. Let us all be willing to make mistakes and be wrong sometimes so that we might grow. Above all, let us be authentic and complex. And let us write and remain willing to hear dangerous speeches.