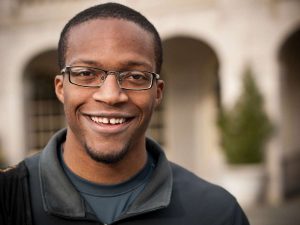 It might surprise you to know that I was a bit of a nerd growing up…not anymore, of course. However, I probably never endeared myself to my friends as I would point out during movies that there was no way one could hear explosions in space, or that a human would probably melt when exposed to the extreme heat and pressure at the center of the Earth, or that there was no technology that could let CSI turn a blurred, low-resolution snapshot of the axe-killer into a clear, high-definition image—not yet at least.

What do scientists do?

I’ve always loved math and science, mostly because it was exciting to be able to explain things and understand them. I would mix up different kinds of bleach and window cleaner at home in hopes of creating an explosion. In many ways, science was the first thing I’d ever really been passionate about.

Though admittedly, I wasn’t sure what it was that scientists really did. I came to Wake Forest excited at the opportunity to finally do real science — and Wake Forest did not disappoint. I learned about the way we can adjust the angle of a few mirrors to store energy from the sun into a small battery, or how we can rotate a cell really fast to break it apart.

Some people were trying to understand the connection between the shapes of little molecules, called proteins, in our body and the different activities they performed. I really liked this last project, and have spent the past three years as part of a computational biophysics group researching these proteins. Perhaps I am still a nerd.

Eventually I went to conferences around the country and even one in Shanghai where I learned about the breaking research of others, and even presented some of my own work. It seemed that I had finally learned what it meant to be a scientist.

For anything you could imagine, we could deduce how it worked, present a model that explained it, and show how one conclusion elegantly, inevitably, followed another…everything neatly explained with the laws we had assembled.

An explanation for everything

At some point, the consequences of this simplistic approach to causation began to weigh on my thoughts. It was weird to learn that my cravings to eat Krispy Kreme doughnuts actually went all the way back to when early humans coveted the energy-rich fats that helped maintain our expanding brain.

There was also some recent disturbing research showing that my feelings of sadness on a bad day might be nothing more than a peculiar mutation in my thyroid gland, and, my happiness, the result of a spike in the amount of dopamine flowing to my brain. Some would probably predict that this isn’t random or even unique, but that we can trace this effect all the way back to my genetics. Indeed, certain genes could make me more likely to have malfunctions in my thyroid gland! Somewhere out there someone was probably working on a model that would look at my DNA, and maybe my parents’ too, and then predict whether or not my thyroid gland was going to malfunction—perhaps even tell me the date.

In one of my classes at Wake I learned that we even have models for poverty that could tell you the number of Americans in poverty this past year — it was 46 million — and probably how many there will be next year. If we know her age, race, and her parents’ level of education, we could probably even explain why the lady down the street goes hungry some months.

There was a long period of time where I was positively terrified to think about the implications of it all. Is this all that I am? A slave to my genetics? A puppet of my thyroid? Could science create a model for everything, predict why I’m five foot eight and why I love vocal jazz? Could it even explain why I enjoy math, or why so many women find me irresistibly attractive?

Even in the media I encountered the pervasiveness of this idea. There was a scene in a TV show called Numb3rs where the protagonist, a brilliant world-renowned mathematician was arguing with his brother, an FBI agent, who was trying to convince him that we could sometimes have a “gut feeling” for what the next baseball pitch was going to be. The mathematician responded, “I think I can quantify why that’s your gut feeling.” Chills ran down my spine, I’ll never forget it.

Unwilling to look my science professors in the eye during class, I would look out the window in shame. What did it mean to be a scientist? Science and math, it seemed, had ruined everything with their endless models, leaving no mysterious, autonomous beauty in the world to be appreciated — not even my own passions.

Not everything can be predicted

It turns out we’re actually quite lousy at modeling things. We’ve struggled to model the workings of a human cell for dozens of years. Though they are the most basic units of life, we simply can’t figure out how everything works.

Proteins are arguably one of the most important molecules in our bodies. However, just to figure out how they transform from shapeless balls of string, which is how they are made, into a beautiful, three-dimensional functioning protein would take the fastest supercomputer in the world months and months. In Nature? This miraculous transformation takes less than one 1000th of a second.

To be honest, we haven’t even figured out how to represent water yet. It’s pretty poorly understood, and we’ve come up with a dozen different models to explain what’s going on in a puddle outside, how all the little pieces bump and dance together.

As for that model that showed that 46 million Americans are in poverty, it’s horribly out of date — it turns out we’ve been using that same model since my grandmother was six. Luckily there was a new model proposed a couple years ago that would lower the poverty count to 42 million. I wondered what it would be like to go tell that same hungry lady that, as far as scientists are concerned, she no longer lives in poverty. It ended up not mattering anyway since a third proposed model arose that put the number all the way up to 49 million. Just as it’s important to develop a proper model for the human cell, it’s also crucial to develop an accurate model of poverty if we’re ever going to address it.

No doubt, we’ll get better at empirically understanding physical and social worlds. There are a lot of smart people in the world, and, Congress willing, we’ll continue to fund research to help us answer these important questions that have already saved lives. But I’ve come to understand that there’s no sense in being afraid.

Rather, scientific discovery seems to be something like climbing an incredible mountain, with each step forward, each advance taking us closer to the top. For most things we simply haven’t reached the top yet, we’re more likely at the tree line. But there’s nothing for me to fear in someday reaching the top, no beauty to be lost. In fact, it is only once we’ve reached the top, and are able to see the breathless view of the clouds surrounding us, and perhaps other, even taller mountains off in the horizon, that we can truly appreciate what a majestic piece of work the world is.

This is what it means to be a scientist: revealing the true beauty behind what we often take for granted — illuminating the lofty mountains disguised in a shimmering puddle of water (or in a tiny folding protein). We’re in luck, because there are numerous peaks out there, each with its summit shrouded from humanity’s view. I guess I’ll just have to pick one and climb it…hopefully, someday I’ll be able to come back, and tell you what I saw.