“Forest for the Trees” 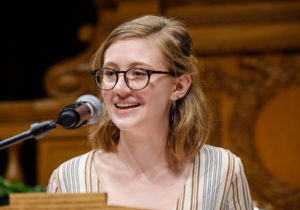 Last fall, I took a capstone class for the English major, and it turned out to be one of my favorite classes in all my time at Wake. What made it different from other classes was its underlying philosophy; in every possible instance, my classmates and I were encouraged to work together. Nearly every assignment was collaborative, and over the course of the semester, our class became a close community of friends. At the very end, our professor sent out an email with the subject, “Music that Fills Your Soul with Joy,” and attached a link with some of his favorite songs. One by one, each of my classmates responded with a list of their own favorite songs. Soon, we had a playlist with well over seven hours of music.

I have listened to this playlist many times since, partly because each song reminds me of the person that added it, partly because it brings me joy in a time when I find myself at one of life’s intimidating crossroads. What I like most about this playlist, though, is that it reminds me that the best and most important things that I have done in my time at Wake have been collaborative. As (an admittedly) competitive person, I find that it is sometimes too easy to get caught up in my individual accomplishments. When I think about my incredibly intelligent, compassionate classmates, I am struck with humility. Anything we create together will be better than something limited by my own ideas, just like the music of a choir is stronger than a lone voice.

As I wrote this speech, I wondered if there was a way that I could prove this point beyond simply stating it. It occurred to me that even the tradition of senior orations relies on competition, although it hasn’t always been this way. I learned that when the first class of Wake Forest students graduated in 1834, all seniors were expected to speak at graduation. Since then, the number of speakers has been whittled down as the number of students graduating has increased, and now we are tasked with choosing only one speaker to represent the whole of our class. It seemed unlikely to me that one person could write anything that could touch upon the experiences of us all. Although Wake has a relatively small student body, it is quite possible that many of you have never seen me before, even though we’ve shared a campus for four years. Maybe if we all could say a little something, we could come closer to finding the words necessary to express these formative years.

So, in the spirit of cooperation, I took this challenge a bit literally. Instead of trying to figure out what to say on my own, I have turned to all of you for some help. In order to get as much input as possible, I looked back through the “Wake Forest University Class of 2019” Facebook page. My (very helpful) brother helped me copy the text from all the posts over the last four years and run it through a computer program that organized all the words from most to least used. Then, I took some of the individual words from the list, wrote them on index cards, and rearranged them to make something new. This method created a lot of hilarious nonsense (some of which I have kept), and sometimes I tried to preserve the intent behind the posts even though the words are shuffled. Though this is far from a perfect collaborative effort, I wanted as many people as possible to have at least some input.

What I have to read to you today is a kind of re-organization of the words of the “Wake Forest University Class of 2019,” and although it is not a substitute for hearing what each of you might have to say, it is something that I think is synergistically more beautiful; it is something that we share, something that has been created cooperatively. Some of these words appeared many times, and others only once, but every word that you’re about to hear is from one of you. Using the (unsurprising) most-used words, I call this poem:

Wake Students Share the Forest
Welcome Wake Forest, Class of 2019
To the official future football center
of innovation scrambled with lofted dorm beds.
Is anybody from Gainsville? Columbia? France? New York? Newell? New student? Newest? Real new?
Is anybody here a Christian?
I signed up for cruel arts, and I was wondering if anyone else did too?
Don’t ask questions like,
If I finished at 12:01,
and if I can’t control this movement of memories
that pop up on WIN,
can I still change my email? or
Will someone with secure summer storage be my valentine?
Here, whiskey and worry are indigenous, but
anybody can join the stress reform.
If you graduate with an English major,
you will not be allowed back home.
Swipe right to the airport if you need a ride
or see firstname lastname at The Bridge for research.
You maybe wish to peruse abroad
Or join the republican academic democrats
who meet in Luter.
If anybody has a question about their project
Jerry has ice cream in ZSR.
By mutual request, Spencer, Danny, David, and WilliamforWake remind you to vote
today and
sign up for the revolution.
By June you will need advice:
Participate by helping others
Rule the country with your creative wonderings
Start serving the community and
Live like it’s easy Tuesday.
Understand what it is to be a Demon Deacon because
Freshman reflections here represent
Improvement
Kindness
Friends
New members of the united intellectual world
Now,
Let’s overwhelm history.