‘Heart of a Child’ 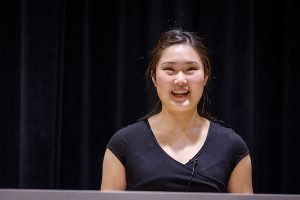 I often joke to my friends that I’m both five years old and 500 years old. Considering my awkward social skills, I am five, while my taste is, in a word, ancient. One of my fondest memories of Wake Forest is of playing Renaissance music in a Collegium ensemble. It must have enchanted me because very soon I boldly decided to major in music, but an idea started to daunt me. What if I am not good at it? What if I cannot find a job? We have all heard about how musicians don’t make money and their most valuable properties are their instruments.

That train of thought went on and on to the point where I basically traced all of my musical experiences. When I was little, it was always a nightmare to learn new pieces because of my appalling coordination. When frustration peaked, I would get up the piano stool, crawl under the dining table and cry. Then covered in tears and mucus, I would resume practice believing that if the worst came to the worst, I will learn the piece by playing it 10,000 times. Even though that sounds like a self-destructive plan, I never doubted that diligence would conquer all. So why do I have doubts now? Did two decades of living exhaust my motivation and faith? Where did the child go? Since when am I scared to dream.

As children, we used to look around with eager eyes, standing on the tip of our toes, reaching skyward, up and up and up, believing we could fly higher than the stars. Then one day we grew up, Santa is not real. Hogwarts doesn’t exist. I have a final tomorrow. I’m not saying that we should live in fantasies, but as we gain the sophistication of an adult, are we also losing the free spirit of a child? We used to be thrilled about the little things in life. We used to know the importance of being earnest. Do you remember the excitement of getting a giant Popsicle with an entire month savings or the joy of finally having built a sand castle after hours of struggle? Do you remember the time where you just wanted to learn for the sake of knowledge, not grades. Children do that every day, but somehow it’s a virtue among college students. How about the time where you decided to venture into the woods, got muddy pants, but you didn’t care because you had seen the most beautiful blue jay you had ever seen. Without knowing we have become reserved, shrewd and complacent, simply because we did not like to be viewed as children.

“You’re such a kid” is one of the harshest criticisms against your character, your competence, and even a denial of your very existence. Striving to be dependable and realistic, we ridicule certain behaviors. We rarely unleash our own emotions. We even censor our thoughts. Suddenly the world becomes a complicated and even hostile place with ogres lurking around the corners. So what do we do? For it is indeed a dangerous world. What will be our weapon? Perhaps you’ll find the answer in this story. I spent my first Thanksgiving with a host family. They had a four-year-old daughter who was exceptionally interested in me and posed question after question. Some of them rather offensive if asked by the grown-up: For instance, why is your nose so flat?

I tried to explain to her that Asians tend to have flatter facial features. And then she asked, “What are Asians?” Soon I realized that the kid did not understand what race meant to her. I was not an Asian. I was simply someone with different looks rather than someone of another race. Just like she had blue eyes and fluffy curls, I have dark eyes, straight hair, and apparently a flat nose. She looked at me with such astonishing purity and candor that put any worldliness to shame. Perhaps the heart of a child is the best remedy for hatred and prejudice. Do be aware though, that being childlike does not equate to being immature and irresponsible. I am by no means encouraging you to whack your friends head by taking your pencil or to eat five chocolate bars at once. On the contrary, each one of us is capable of having the simplicity of a child, as well as the refinement of an adult. Here at Wake Forest, we run a ANOVA analysis, read Milton and calculate photon momentum every day. Meanwhile, we throw toilet paper into trees and play Humans versus Zombies in the library. So yes, we can be adults at mind and children at heart. If we refine impulsivity into spontaneity, naivete into sincerity and obstinacy into resilience.

Nevertheless, I think we all realize that compared to the actual adult world, Wake Forest is a shelter. I do not want to sound like a cynic, but when we leave every tower of academia, many of the obstacles we’ve grappled with now might be nothing in comparison. We will be forced to grow up, to make compromises and to give up airy-fairy notions. But I implore all of us: Do not abandon the child inside. It is the purest form of you, audacious yet sensitive, fragile yet unsullied by the bitterness of life. That child will elicit great power, like a ray of light penetrating the deep ocean of exhaustion, deception and corruption. It is our most precious resource as we embrace the future.