‘Living and Loving the Questions’

We were all bombarded with questions our first year here: “What dorm do you live in? What do you think you’ll major in? What do you want to do in the world? Where are you from?” 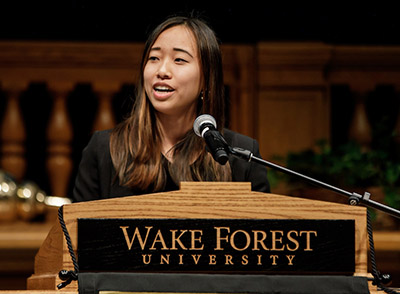 I had answers to most of these questions. “I live in Collins. I am pre-med and intend on becoming a doctor. I’m from Raleigh, NC.” Occasionally, however, I would be asked a follow- up question: “But where are you from from?” as if the additional “from” would elicit a different response and reveal the origins of what appeared to be an Asian-esque face standing in front of them.

I did not have an answer at the time. Do I assert that I’m from Raleigh—the state’s capital again? Should I end the conversation at: “I’m Asian.”? Do I share that my grandparents currently live in Beijing so maybe I am from from China, despite being a U.S. citizen from birth?

My parents immigrated to the States in ’91 to pursue their post-graduate studies, and I was raised on more rice and dumplings than is probably healthy. I take off my shoes before entering houses, and I have never celebrated a full-house American Thanksgiving, as the majority of my relatives are situated across the globe. Yet, as an NC native, I speak English with the occasional Southern accent, I’m fond of EDM music, and I love mac n’ cheese.

In those early days, I felt like a walking paradox: uncertainty, doubt, and insecurity followed me around campus. There was fear that if my peers knew the whole me—my childhood, my heritage, and my ethnicity, I would be seen as an outsider looking into my community. So I tried to detach myself from the stereotypes I believed people had in mind when they saw me: someone who was expected to excel in academics. A submissive, soft-spoken secondary character, okay and used to being unseen.

Who am I? And where am I from from?

For the first time in my life, I questioned my identity upon arriving to Wake. But I resisted the temptation to engage with these questions. The patience that was necessary to discover the answers, the courage it would require, and the apprehension that the answers I would find would not be what I was expecting was enough to sway me from engaging with the questions themselves. I floated in a state of limbo for the remainder of my first year.

A dear friend and mentor gave me a book, “Letters to a Young Poet,” prior to his graduation:

“I want to beg you, as much as I can, dear sir, to be patient toward all that is unsolved in your heart and to try to love the questions themselves like locked rooms and like books that are written in a very foreign tongue,” Rainer Rilke wrote to his 19-year-old protégé Franz Kappus in 1903.

In this spirit, I began to embrace the questions I had for myself and for the world. This began the summer following freshman year. Perhaps engaging with the questions would provide me with the clarity I was seeking.

With the mentorship from brilliant faculty and staff, I traveled to the Netherlands to examine the food policies in Amsterdam’s primary schools through the Richter Scholarship. That was the summer between freshman and sophomore year. I emerged from my first field expedition enamored by the study of world health, and I sought to continue understanding how health outcomes differed in varying cultural settings.

With my interest in public health maturing, I led a field study monitoring lymphedema in patients diagnosed with lymphatic filariasis, one of the world’s most neglected tropical diseases, in Sri Lanka the summer following sophomore year. Finally, I embarked on the journey of studying in England for my full junior academic year, where I also had the opportunity to engage in research on HIV transmission modelling.

Discomfort became comforting. Learning became the knowledge of possibilities. And my answer to the question: “What do you want to do in the world?” unintentionally evolved through the culmination of my experiences.

But I also learned that to exist as a traveler, in the spaces between spaces, was an opportunity. I had been physically uprooted; yet the glass ceiling that I perceived to be associated with my ethnicity dematerialized. My journeys overseas allowed me to recognize the defined barrier I built here in the States. This barrier had detached the “Chinese” from “American” and “American” from “Chinese.” I had previously isolated different components of my identity to mold into being what I perceived the environment surrounding me was asking for. I did not allow the ABC, American-born Chinese, in me to surface. I had broken the whole, that is me, into mutually exclusive parts, but I now acknowledge that I did not have to live in fragments.

Today, I can stand here and confidently say:
I lived in Collins.
I am a Biochemistry and Molecular Biology major.
I am not pre-med but I am deeply passionate about global health. I am an avid volleyball player.
I am a Southerner.
I am Chinese American,
and I am from from Raleigh, NC.

Wake has been my home the past four years, and the people here have helped me navigate uncertainty and doubt. To the family, mentors, and friends—both old and new, who listened without judgment or criticism: I will forever cherish and be grateful for your kindness and curiosity. Thank you for the giggles, for the space to be vulnerable and honest, for the willingness to grow alongside me…for freeing me from the boundaries I had imposed on myself by helping me to understand that there is space for duality.

When we live and also love the questions we ask ourselves and those around us, we transform. We all become bold in our assertions. We become intentional with our actions. And we all become ambitious in discovering our curiosities. We allow ourselves to be sensitive to the power of narrative, and we discover how to involve ourselves in the critique of privilege. We all learn how to be humble and how to live with humility.

Our experiences at Wake contain multitudes—Joy. Loss. Vulnerability. All of which, we will use to reach deeper into our humanity and rise to greater connection. Our time here was, is, will always be one of the most memorable of our lives. But let’s not shy away from our past and let’s not shy away from the questions. We all now hold the power to continue going deeper in our inquiries and seeking the unknown.

“….And the point is, to live everything,” Rilke said to Kappus. “Live the questions now.”