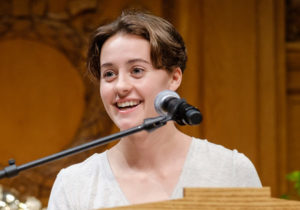 I’m and English major who has read hundreds of books filled with wisdom about life, yet I’m choosing to talk about spreadsheets. I know, I also think numbers are boring, but hear me out. What are spreadsheets? They’re lists. Documents filled with numbers or words, split into columns and rows based on like characteristics. They are divisive. They separate things to fall in line with the group they belong to. In life, at times, we feel like we are on a human spreadsheet. We fall in line where we belong. Each of us, a single cell, consistent with one row and one column. The cell we are assigned too is not often self-assigned. It is based off of perceptions and preconceived notions. Someone or something tells us where we belong, and this makes us feel as though we are defined by only two factors. It’s hard to be yourself when you feel like everyone around you sees you through such a narrow scope.

From the moment I stepped foot on Wake’s campus in August of 2015 I knew this was going to be an amazing four years. I felt very comfortable here. I felt at home. I think that comfort came from fitting into an often times, homogenous student body. I looked like every other girl on campus. I wore my Hunter Boots when it rained, I ate my dinners at the Pit, and I enjoyed the occasional late night Subway trip with my friends. My cell on a spreadsheet would fall under column: female, row: typical Wake Forest student.

All of that changed a year ago. After 20 years of keeping secrets from me, my brain finally told me: hey guess what, you’re gay! If you’re curious about what that realization is like, it’s like when you’re a kid and you finally find out Santa isn’t real. Part of you thinks ‘well I guess I kind of always knew.’ Another part of you thinks ‘wow this is a scary new reality I have to live in. Will I still get presents?’ You want to tell everyone this news but you’re not sure how they’ll react. Also, oddly somehow your parents knew the whole time, but wanted you to figure it out for yourself. It’s a confusing time, but you can’t live forever thinking Santa is real, and you certainly can’t live forever being someone you’re not.

After a few months of being out, I realized that I would never be happy if I didn’t become fully myself. I chopped off my hair, because looking how like this feels the most authentically me. It was liberating and great for a while, but then I came back to Wake and realized not many people here look like me. Now I was different. Now my cell on a spreadsheet would read, column: female, row: non-normative outsider.
Growing up, adults would always tell you it’s good to be different. That sounds a whole lot better when being different means you’re the first kid to lose a tooth and being that kid with the gap in your teeth means you are first grade royalty. Being different is less fun in college when you come out as gay and you feel like it has suddenly become your only identifying quality. Then different isn’t so fun. Different is scary. Different is lonely.
Thanks to my teammates, family, and friends I feel unconditional love and support for who I am every single day. However I quickly recognized that is not a privilege everyone shares, and I wanted to do something about it. I wanted to make Wake an even more accepting place.

Early this past summer I noticed that Duke’s Women’s Soccer team hosted a Pride Game during the previous fall season. It seemed like an awesome idea and I wanted to bring something similar to Wake. My teammates and coaches were all completely on board and we began our 2018 soccer season with high hopes of hosting a Pride Game. Unfortunately the idea was initially shot down by the Athletic Department. I was upset by the news and spent a few days gathering my thoughts and trying to decide what to do next. I wanted to…I needed to prove to the Athletic Department and, probably even more so, prove to myself that this was an idea other people cared about. I pulled out my laptop and drafted a statement of support. The statement read:

“The Wake Forest Women’s Soccer Team is planning to host a pride game at a home game during this 2018 season. Unfortunately, this idea has been rejected by the athletic department.
A Pride Game is designed to be an event that celebrates those who identify with the LGBTQ community as well as the allies who support it. It is about acknowledging a marginalized community through celebration and sport.
The statement of support went on to say…”Sports are a place of inclusion. They are a space where people from various backgrounds, races, ethnicities, sexual and gender identities can come together to become a team, even a family. Because sports inherently foster inclusivity, it is important that our collegiate athletic programs use our platform to promote just that.

My petition closed with an acknowledgment of support and acceptance of the LGBTQ community by any signee.

I finished writing the statement and sent it out to my teammates and friends asking that they share it with others if they felt inclined to do so. For those who are unfamiliar with how a google form works, the responses come in live, updated and time stamped on a google spreadsheet. I took a deep breath and waited anxiously to see if I would get any signatures.

I sat in my room in silence and watched the names roll in on the google spreadsheet. The first names I saw were those of teammates and friends, then suddenly names I didn’t recognize. Or names I did, but I wondered how they’d heard. My phone buzzed with text messages of people sharing their support and asking for the link so they could post it on social media or send it to friends and family. It spread through the student body like the news that the Reynolda Campus is closed for a snow day. I watched the names fall one by one, down the page. As 10 became 20. As 20 became 50. As 50 soon became 100. Suddenly a spreadsheet, something I once thought to be divisive – was exactly the opposite. The names on THIS spreadsheet were all united for the same reason. I became overwhelmed with the love I was receiving and ran into my friend Nonie’s room crying tears of relief and joy to tell her how in 28 minutes we had over 200 signatures! Little did I know that in 48 hours there would be well over 1,000. 1,000 friends, old and new, declaring this place, our place, our Wake, a place for love, a place for growth, and a place where everyone is welcome.

Being different can be very difficult. Especially if hiding your differences is impossible or if doing so would make you miserable. Diversity is what makes the world an interesting place. Although we all conform to many common columns and rows, each of us is diverse in our own way. No one should ever feel like they can be defined by just one column or just one row. When I was told we could not have a Pride Game, I lost faith in this place I called home. I felt betrayed by a place I held dear. I felt the answer I was given was surely not indicative of the University I know and love. So I took a chance. Vulnerable and very afraid I turned to my community, our Wake community. With the simple click of a button I let an entire college campus into the most intimate part of my life. I watched the names fill in one by one down the spreadsheet with tears in my eyes and only one thought in my head. Wow…This is the Wake I love, this is pro humanitate. This is a community rallying behind one of its own to prove its dedication to being for humanity. All of humanity. In a world that has become increasingly divided, I urge you to show endless love for all of those around you, no matter where they may fall on the human spreadsheet. Be willing to listen. Be willing to change your mind. Be willing to change someone else’s mind. Be the reason someone else finds the courage to be different. You never know, that diffence may be the idea that brings us all back together.