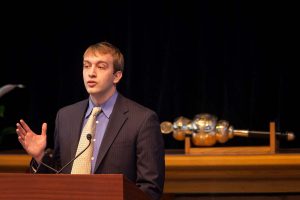 After hundreds of hours in classrooms, thousands of hours in study, and tens of thousands of dollars in tuition, I am finally ready to return to the eighth grade. Next fall, I will go to the Mississippi Delta with Teach for America. The pay will be terrible, the hours long, and the summers excruciatingly hot. If you had asked me four years ago what I would be doing with my life after graduation, teaching in an impoverished rural area would not have been my answer.

I likely would have told you about the law schools I hoped to attend or the doctoral programs for which I wanted to apply. More frankly, I aspired toward a life filled with of personal satisfaction, intellectual stimulation and creature comforts. And some day I may even choose to live that life. But that day is not today, because I owe. In point of fact, we all owe.

Now, the debt we owe to our friends, professors and parents is not particularly revelatory; that fact is quite apparent to anyone who has sat in a classroom here at Wake Forest or had a late night conversation in the dorms. I speak of a deeper debt, a silent debt, a debt whose insidious nature easily goes unnoticed. It is fed on a diet of ignorance and apathy; it breeds in large institutions that are removed (or remove themselves) from common affairs. And until recently, I did not see that I was part of the problem.

But I can tell you the exact moment when I understood my delinquency on payment. Sitting on a bench on the fourth floor of the Winston-Salem county court, I was waiting for my case to be called over the loudspeaker. No, I was not in court for any criminal or civil infraction; rather I was bringing suit against my auto mechanic in small claims court. Though I won the case, the issue with my car turned out to be wholly unimportant. As I waited for my case to be called, the sound of crying from the other end of the hall made me look up from my documents and notes. A woman in her mid-twenties was clutching at two little girl’s hands as they were being led away by a court official. The girls were stone-faced as they watched their mother weep. I was sitting across from juvenile court, and I was witnessing the separation of a family.  I felt small. My case about my car felt small. My problems, worries, doubts and fears all paled in comparison to the threat of losing my family, to the actuality of the mother losing hers. Ladies and Gentlemen, I was still thinking the wrong thing.

My concerns and thoughts were still all about how this woman and her children applied to me. Of course they have a life, an existence entirely separate from my own. But further, it is the understanding that, because of the way our society works, because of the way large institutions work, tragedies of both accident and intention endure as long as the institutions that create them endure. The tragedy of the rehabilitated criminal exiting prison who cannot get work, of the mother on welfare who wants to go college, but can’t because her checks will stop coming…of the child born into a home without sanitation or electricity. It is the ultimate moral luck problem: because of my birth, I was afforded opportunity. Because of my position, I am the tacit beneficiary of the systemic inequity brought about by our societal institutions. Any one of us could have been the mother or those children. Instead we sit in Wait Chapel, at a prestigious university, celebrating our institution and ourselves. We at Wake Forest are girded by supports and institutionalized systems that we may not always see, but to which we owe a great deal. Whether because of ability, work ethic, or simple fortune, we at Wake Forest tread a comfortable and rewarding path that few have the opportunity to walk.

It is important to note that I do not speak about socioeconomic class or social station alone. While systemic inequity might certainly apply to one class if we limit ourselves to finance, a broader understanding includes race, sexual orientation, psychological health, religious affiliation, and many others. These stratifications benefit some, and damage others. While I believe few seek to actively harm, we all tacitly consent to it by participating in these institutions. At Wake Forest, we have made strides, and we do not sit idly by. But we must all remember that we still have a long way to go. An embarrassing fact made especially poignant on our 50th anniversary of integration: Princeton review has named Wake Forest the 8th least hospitable school for LGBTQ individuals, not to mention the de facto social segregation apparent to anyone on campus. Can we not do better? Can we not use the tools that Wake Forest has provided us to do something about these problems? As a University, we have made great strides since our founding; I am looking forward to our future progress.

Perhaps as a senior, I am late in the understanding of my debt. I hope that you already participate in outreach programs into the global and local communities, becoming part of something greater than the clubs and organizations here. I hope that we all strive to do a bit more, like volunteering at a hospital or making service trips to a foreign country. I hope you serve in the homeless shelters and soup kitchens around Winston-Salem to which you donate your food and your clothes.  I hope you go forth to encounter, in the words of James Joyce, “the reality of experience”. While Wake Forest is a wonderful institution, it is by its very nature a bubble. It is a bubble that we students must break. For me at least, it took the reality of experience.

Once our bubble is broken, we not only have a debt, but also an obligation, a duty to every woman and every child at the end of every bench. That realization has led me to the Mississippi Delta to teach middle school, because I believe that the solution starts with the proliferation and democratization of knowledge. Indeed, our motto, Pro Humanitate, calls on us to shatter the illusion that knowledge is only for the privileged, that social stratification need dictate life, and that institutional injustice has to be permanent. Let’s listen to our creed and then…let’s act.