‘The Case for Generalism’ 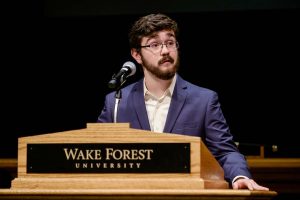 Even as I approach the end of my time here at Wake Forest, I sometimes find myself still asking, “Why am I here?” Leaving the existential side of that question to more philosophical minds, I look instead to the “why?” of the university as an institution. What is it for; what purpose does it serve? Given my background in linguistics, I am of course tempted to find a clue in the word “university” itself. The word’s etymology is relatively simple, but the root meaning is nonetheless surprising. Universite, the Latin originator of our “university,” translates to “the whole.”

Now, if we look at the general perception of universities, it seems that we have strayed rather far from this holistic model. Universities are now seen as places where students learn to specialize and commit to a single course of study, so as to excel and better earn a living. Such an attitude is apparent even here at Wake, where the discourse of “educating the whole person” is ostensibly popular. Students (and, as many of us can attest, parents) seem to be far more interested in this specialization than the broadening of one’s horizons. Divisional courses are something to be survived rather than enjoyed. Majors are declared in our second year and usually completely occupy the focus of our next year or two. The function of the university, given this context, becomes less an education of the whole person and more a refining of the student’s talents, so as to better find a career.

Following this model, schooling can accurately be described as having a pyramid structure. We begin with very broad basics when we are

small, and as we grow up, the courses become narrower. For example, a first-grader’s Science becomes a middle-schooler’s Life Science and Physical Science, which become the high-schooler’s Biology, Chemistry and Physics, each of which specify even further on the collegiate level. Moreover, as these subjects get narrower, the student must pick a smaller and smaller proportion of the available options. Breadth is sidelined in favor of depth; as the pyramid grows taller, it tapers to a point, the terminus of a student’s formal education.

Now, I wish to be clear in saying that I AM NOT AGAINST THIS SYSTEM. The utility of depth and specialization is difficult to dispute. Even I, who have sought out “the best of both worlds” with three minors in addition to my major, acknowledge that merely being generally educated is not an acceptable way to put bread on the table. My expected degrees all dovetail enough so that my own pyramid comes to a point, just like those of my peers.

However, I do believe that there is still a valuable case to be made for generalism, even if this perspective doesn’t necessarily occupy the focus of one’s formal education. To use an example that lies very near and dear to my heart, I play music, with proficiency in nearly the entire woodwind family of instruments, from clarinet to contrabassoon. This musical interest has nothing to do with my language-oriented academic work at Wake. On paper. However, I would argue that music has been as indispensable to my personal growth as my classwork, for two main reasons.

First, in exploring a field separate from the one I plan to study, I have found truly fascinating parallels between my linguistic study and my musical ventures. Prosody, timbre, dialogue, and tone – all of these phenomena are just as vital to performing phonetic analysis as they are to performing a saxophone solo. The understanding of each of these in one field enables a deeper understanding of it in the other.

Second, and in my opinion just as vital, having some productive outlet allows me some intellectual breathing room. While some may argue for the need to “switch off” every once in a while, I would abbreviate this suggestion to merely “switch” – in shifting my focus from my courses to music, I am remaining intellectually active, but at the same time I get a sort of “change of scenery” from my engrossing, albeit occasionally-monotonous, world of literature and discourse studies.

Now, some may counter that I am merely replacing one tip of the pyramid with two, that all I am advocating for is the obvious maxim of not putting all of one’s eggs in one basket. I find this truth accurate, but incomplete. To further my point, I advocate that we, as students, can remain in a scholastic mindset even when the school itself is absent.

Again, I make an appeal to etymology and the duality of the root word of both “school” and “scholastic,” the Greek skholé. Interestingly, this etymon originally denoted both our conventional idea of “school,” with students and a teacher and lectures, as well as free time. This duality is distilled in English, with learning being a more all-encompassing term than education, although the two are hardly mutually exclusive.

We constantly encounter matters that appear irrelevant to our studies. Rather than marginalizing these matters to better focus on our specialties, I argue that we should embrace and approach them with the same critical, analytical, and scholastic eye that has granted us success in education. Even lacking any direct parallels like the ones between language and music, this lens, this attention still bears fruit, allowing us to better appreciate and deal with the information that surrounds us. With this scholarly eye, although we specialize, we become generalists. This perspective is what I believe is the true gift of a university.

After graduating from college, every student can accurately describe themselves as a scholar of something. Again, though, I would abbreviate this description to get at its truly important essence. I am a scholar. What I am a scholar of is relevant and important, but not what is most relevant and important. The “of (blank)” has its moments to shine, but for every hour of every day after we finish our work here, our gift and our charge is to be scholars, to learn the world around us, not to merely exist in it. We are born with the potential to act, and have been given perspective. Let’s make something of them.