‘The Confessions of A Show Dog’ 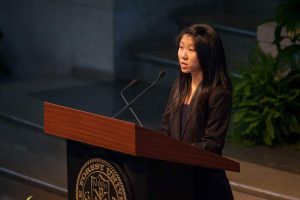 “So what’s your trick?” asked my fellow interviewee. I was sitting in the admissions office of X medical school at some indecent hour of the morning, paused in my unattractive inhalation of a croissant.

“Mmf?” I asked intelligently, not quite sure what “trick” I was supposed to have.

“You know, your difference trick,” he replied. “What makes you different from the rest of the applicants.”

I did have a difference trick. I had a first-generation immigrant trick and a unique activities trick, both of them designed to be crowd-pleasers and calculated to set me apart from the stereotypical applicant. At that moment, however, it seemed to me that I was not a medical school applicant, but a prize poodle on display at a dog show. The judgment of whether I was fit to be eventually trusted with other people’s lives relied on how many more tricks I had than my canine peers.

This show is not new to any of you. All of us are sitting here, about to graduate from a prestigious institution, so clearly this approach works. From as early on as junior high we have been told that in order to get into a good college, we need good grades, solid leadership, and preferably a national-level medal or two. In college, we learned that in order to get into law school, medical school or graduate school, we have to jump through more and more hoops in increasingly complex configurations.

I was well-trained from an early age. I once ran cross country for two years so that I could put a sport down on my college application. I frequently got lost in the woods and was the embarrassment of my team. I was doubtful as to how my best mile time, which we shall not discuss, had any bearings upon my ability to do science, which is what I wanted to do. I was told that this is how you got to go to school and do science. Fair enough, I thought. As I continued into college I was committed to being a show dog of the highest caliber. As a freshman I attended every single club meeting that had the words “resume-building” in the posters. In my quest of becoming the perfect applicant, I was willing to trim off all the parts of myself that did not fit the mold. I had loved art; I stopped drawing. I had loved literature; I stopped writing. I had been amazed that the mechanisms of life could be reduced into an elegant dance of just a handful of elements. But as I lived or died by my grades, I lost the romanticism of why I had loved science in the first place.

In the summer of my sophomore year I went to Shanghai to do research on traditional medicine. My grandmother had been diagnosed with breast cancer the year before. The word “cancer” had scared all the steel out of the woman who had raised her siblings, children and grandchildren. I listened to her for hours and felt more powerless with every weak word she spoke. I had no idea what to do or say. I realized that not a single one of the hoops I had jumped through on the way to becoming a doctor had instilled any actual doctoring ability in me. In my guilt I saw that the performance I had been so invested in had led me astray from my ultimate goal, which is to become someone who can make people feel better. Instead, I had become a show dog. I had become the process and not the goal.

It is somewhat ironic that the very thing that liberated me from performance was performance. In college I discovered dance. I grooved on my way to class, after class, and occasionally in my head during class. This was not in my four year plan. But once I started, I didn’t know how to stop. I didn’t know how to quit the adrenaline rush of being on stage in front of a screaming crowd. I didn’t know to quit the silliness, camaraderie and love of my teams, Momentum Crew and Lost In Translation, which have become my second families. I have performed for the approval of others my entire life, and for the first time I was learning how to perform for myself, just to see how far I can push myself.

With this first step off the beaten track came others. I decided to double minor in Philosophy and Studio Art, simply because they’re beautiful. I had initially worried that I was too presumptuous. What did dancing and philosophy and art really have to do with medicine? My answer is that good medicine heals the body and the soul. My passions made me a real person, and to suppress my authentic self was to rob myself of the ability to fully, genuinely relate to others. We are urged to embody the motto of Pro Humanitate, but the lesson I have learned is that until I knew how to be for myself I could never be “for humanity” to the best of my capacity.

Nobody wants to live like a show dog, even though they do get free food. I want to live in a world in which none of us have to perform to get to where we want to go, but I don’t think such a world is possible. However, I will always remember even as I am being externally judged that I am more than what can be quantified, more than my grades, my scores, my list of accomplishments. I will remember that behind my performance I have an authentic self. The most important part of our journeys is to not get lost.