‘The Lethe and the Liberal Arts: On Avoiding Chronological Snobbery and Remembering the Past’ 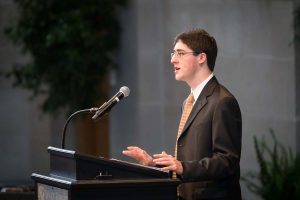 There is a tremor in both culture and higher education that threatens to become a rather major fault line. That tremor is arrogant intolerance. I say “arrogant” intolerance because not all intolerance is bad. For example, we are and should be intolerant of plagiarism and plagiarists in the academic community, as well as a great number of other evils. Arrogant intolerance, however, is a different matter entirely. This intolerance is the rejection of another individual, group, or belief system not on the basis of moral, intellectual, pragmatic, or any other reasons, but on the basis of no good reason at all. Those who are possessed by arrogant intolerance will no doubt give what they believe to be reasons for their intolerance, but often these reasons are merely what G.K. Chesterton referred to as the “tags and tail-ends of somebody else’s thinking” (“The Revival of Philosophy- Why?”).

We have the new in place of the old, the ever-changing in place of the stable, innovation in place of tradition. We have YouTube in place of television, Pandora in place of radio, Wikipedia in place of actual work. And we think we need the iPhone 5 in place of the iPhone 4. We should not be Luddites; technological advancement is good. Ovid was right: “What we were and are/ Is not what we will be tomorrow” (15.215-216, my translation). But in a world of high-tech gadgets, Facebook, Twitter, and the supremacy of the “selfie,” we have developed such an obsession with our own stories, lives, and times that we have forgotten that there is a remarkable world around us and important, interesting discussions stretching centuries behind us. And so we have lost the truth.

What is truth? The Greek term for truth, ἀληθεία, is formed by combining α-, expressing negation, and –ληθεία, from a Greek verb meaning “to forget.” Truth is that which is not forgotten, that which previous generations bestow on those that follow. Or at least it is that which should not be forgotten. We are drinking deeply from the Lethe, the river of forgetfulness in the land of the dead, to which Keats warns us not to go even in our deepest sorrow, and we are suffering for it (line 1). Forgetfulness of the past is inseparable from intellectual and moral decay, and abandoning the truths of the past produces cultural and intellectual darkness.

The only way to rescue ourselves from experiencing such darkness is to follow the example set by those who illuminated the world around them. Concern for the classics in the court of Charlemagne sparked the Carolingian Renaissance of the 8th and 9th centuries. The appropriation of ancient literature (including Aristotle) led to another intellectual revival in the 12th century. And the rediscovery and proliferation of the Greek and Latin authors and languages reinvigorated Europe in the 14th and 15th centuries as the writings of influential intellects such as Homer, Aeschylus, Demosthenes, Thucydides, Vergil, Seneca, and Cicero became a light to the nations.

Reading texts by great thinkers of ages long past such as these is the foundation of the artes liberales, or liberal arts, the study of which Cicero was so vigorously promoting when he said, “This is the most liberating and humanizing recreation of the mind” (7.16, my translation). Read philosophy. Read history. Read poetry. Read the great writers in every branch of the humanities, and do not neglect learning from the past simply because it is the past. At the risk of violating my exhortation not to make too much of our own stories, I will testify that spending the last four years at Wake Forest with many of the authors I have mentioned has been one of the most rewarding decisions I have made. Wake Forest, and my closest professors in particular, have forever shaped the way I think about the world by pointing me to the great thinkers of the past. This event itself is evidence that our administration and faculty care about celebrating and reflecting on our tradition as a liberal arts institution, an institution that values the past. For this reason, I am honored to be speaking here this evening, and I am thankful to all of you who have made Wake Forest the type of place that encourages the “liberating” and “humanizing” of the mind. To those of you who have not yet recognized the gift, the exhortation at the heart of Wake Forest, this is it: Study the liberal arts, and you will have a guide for life.

Chesterton, whom I quoted above, also tells us tradition is “the democracy of the dead” that “refuses to submit to the small and arrogant oligarchy of those who merely happen to be walking about” (“The Ethics of Elfland” 251). Let us not be the arrogantly intolerant oligarchy. Let us not be the chronological snobs who without reason reject the past by appealing to terms like “progressive,” “modern,” and “practical” as the “tags and tail-ends of somebody else’s thinking.” Think about what the past has to say. Take it seriously. And treat it as you would have the future treat you, with respect and with open hearts and minds.

—, “The Revival of Philosophy- Why?” The Common Man. The American Chesterton Society.