‘We are Wake Forest’ 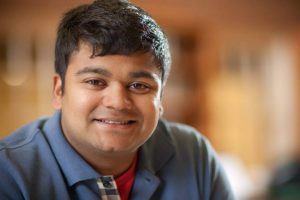 I still remember the first moment that I was on my own. It was after Freshman Move-In Day, when my father prepared to head home to Baltimore, and I was to embark on a new chapter of my life at Wake Forest University. I recall that very few words were spoken as we traded our goodbyes; we anxiously recognized that our relationship would never be the same.

Before he left, he gave me a piece of paper on which he made a few requests. Included were the typical, “Say your prayers,” “Study hard,” and “Call home.” At the bottom of the note, however, my father had scribbled, “Remember who you are.” With that, Dad put on his seatbelt and drove away, and I was, as I said, on my own.

I had a problem, though. My father’s request “remember who you are” required that I know who I was. Growing up an American Bangladeshi Muslim, defining my identity had always been very hard; I considered myself to be somewhat of a global citizen with ties to so many different types of people, making labels and self-definition incredibly difficult.

Upon entering Wake Forest, articulating my identity would prove to be even more challenging. The new environment offered many academic, social and spiritual paths, and I was overwhelmed pondering the possible outcomes of whichever identities I embraced.

I realized quickly that self-understanding would prove to be crucial to my college career; if I did not know myself, how could I know my role in the collegiate community? Initially, I took a piece of my father’s advice to “study hard,” thinking that through intellectual engagement I could cement my identities.

Classes in Arabic, international politics, economics and religion aided in this search, yet I soon found that reading, discussing and critical thinking within the confines of Tribble Hall inspired questions that could only be answered outside the classroom.

Motivated to explore my identity as a global citizen as well as my role in the Wake Forest community, I traveled with University Chaplain Reverend Tim Auman, Dr. Neal Walls of the Divinity School, and a group of undergrads and Divinity School students on a two-week trip to Egypt.

During this excursion, we studied the relationship between the country’s Muslim majority and Coptic Christian minority. Historically these groups have coexisted with tolerance, yet feelings of marginalization and animosity persist due to stifled Coptic political power and limited autonomy.

Despite their differences, I discovered that these two communities shared something integral to their diverse identities. In Cairo, I saw conservative religious dress, preservation of sacred space, domed and arched architecture, and gender dynamics in Coptic churches, things I had always associated with Islamic culture. Most striking, at Deir Mar Antonios, a Copt monastery built 400 years before the inception of Islam, I read “Allah,” this time referring to Jesus, as it glimmered in Arabic calligraphy on the walls.

Arabic has always been my closest connection to my religion as it is the language used by Muslims everywhere. In observing Coptic Christians, I found that Arabic, the fundamental building block of the Muslim faith and the common link within the Muslim world, serves as a connector to members of another religious community as well. Regardless of the politics and power struggles that divide Copts and Muslims in Egypt, it is their independent yet correlated love, admiration, and respect within their faiths that inevitably tie them together.

The following summer, 11 other students and I participated in the University Study Abroad program in Fez, Morocco, under the tutelage of Professor Tom Brister of the Political Science Department. In addition to our language classes, Professor Brister challenged us to see the interconnectedness of globalization, and how Morocco served as a prime example of this worldview.

For one of our assignments, Dr. Brister asked us to contrast the daily lives of the Moroccan cosmopolitan aristocracy to that of the Amazigh or Berber, tribal people of the nation’s rural areas. In our analysis and discussion, we found that Morocco’s rich historical diversity, marred by ethnic and cultural conflict, had resulted in great variance among the people.

We saw great poverty in the villages of the countryside juxtaposed with lavish European styled villas on the beaches of Tangier. Some of the nation’s people identified as Arab, others as African, several as European; some would speak only in French while many exclusively in Arabic; most used a mixture of the two. There is even no such thing as a typical “Moroccan cuisine,” as many waiters would claim both croissants and couscous were equally authentic Moroccan foods.

This varied collection of peoples and customs did not weaken Moroccan unity; rather, it strengthened it. We saw the Moroccan motto, “God, Nation, King” etched on the rolling hills of Ifran and in the mosaic tiles of Casablanca indicating that the people’s pride in their national identity pervaded all differences. They were indeed all “authentically Moroccan,” for it was a common experience of cohesion, struggle and diversity that defined their national identity.

In my own naiveté, when I arrived at Wake Forest I believed that it was necessary to define myself before discovering how I fit into our community. Through my travels in Egypt and Morocco, however, I have discovered that identity and community are not mutually exclusive ideas that one can isolate, analyze and explicitly articulate.

Rather, both are intrinsically linked; organic but developed, real but abstract, concrete but indefinite. Most importantly, just as communities gain strength and definition from the quality and depth of its members, individual identities are equally as reliant on the values and shared experiences of their communities.

As I saw in both Egypt and Morocco, communities that identify with particular faith and social traditions can have a common interest in the fate of their country. In Egypt, I observed as Copts and Muslims, people who oft consider themselves worlds apart, shared culture and practices essential to their faiths and near to their hearts.

Through my studies in Morocco, I found that while Moroccans are diverse in their ethnicities and livelihoods, their mutual experience and national identity trumped feelings of division. Clearly, this intricate and delicate understanding of community and individual exists here at Wake Forest as well.

We are Yankees and Southerners; we come from various states and a variety of nations. Some of us speak in variables and chemical formulas while others in prose and iambic pentameter. We are conservatives and liberals, introverts and extroverts. We have our own unique identities.

Our Wake Forest community is strengthened by our differences, but its foundation is built on our shared commonalties. Our passion for higher education. Our belief in Pro Humanitate. Our allegiance to the Old Gold and Black. Our trust in each other and the idea that one of our successes belongs to everyone, and that if one of us fail, we as a community have failed.

For while we claim different identities, we all share a common interest in Wake Forest. Indeed, Wake Forest is now what it has always been, and what it will be for years to come: an investor in talent, a believer in potential; an institution that recognizes the beauty of common humanity, and provides the resources and opportunities to make our aspirations come true.

Three years ago, my father challenged me to remember who I am. Although I have much to learn about what it means to be an American Bangladeshi Muslim, I can tell him now with conviction that I am Wake Forest. The community in which he left me has now become a part of who I am and who I will become.

I have learned in my time in Egypt, Morocco and of course Winston-Salem that while our differences add depth and variance in our personal identities, it is through our shared interests that our community is built. Indeed, while we will be a part of many identities and communities in the future, being Wake Forest will forever serve as our foundation.

Zahir Rahman is a political science major and religion minor from Baltimore, Md.