‘What We Create in the Mind’ 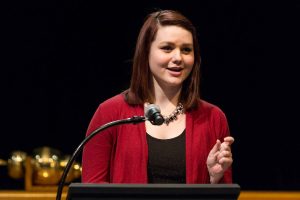 Meetings with professors can often be intimidating – and for a variety of reasons. Maybe you received a bad grade or you are asking – ok, begging — for a 24-hour extension. For me, meetings with professors were intimidating because Wake faculty have the strange ability to hone in on the deeply personal questions that get right to the heart of the matter. I remember sitting across from Dr. Stephen Boyd in his office in the fall semester of 2013. I had just returned from Cherkassy, Ukraine where I had worked at an orphanage for three months to fulfill my internship requirement for my Religion and Public Engagement Concentration. Surrounded by books and important papers, he leaned back in his chair with his hands behind his head, looked at me, and asked in a gentle yet probing tone “But why do you care about this? What is it about Ukraine that makes you care?”

Talk about intimidation. I quickly began to fumble around with some words I don’t remember now, but before I came up with some meaningless and forgettable answer he stopped me and said, “Maybe you should give this question some thought because it is one that you will have to answer.”

I am happy to say that over a year later I have come up with a meaningful and memorable answer. It came to me as one of those nuggets of knowledge students uncover in their 200+ pages of reading – those small sentences that make all those pages worthwhile. It was in an essay on Eastern and Central Europe by Milan Kundera where he eloquently noted: “The identity of a people and of a civilization is reflected and concentrated in what has been created by the mind.”

After I returned from Ukraine, the country quickly became engulfed in revolution and rebellion. My old Soviet-era apartment building was burned to the ground and the city I had walked around one month prior was destroyed. Many of my friends had left their homes to protest in the Euromaidan Square. My friend Sergei was among them. He was the first friend I made in Ukraine. We met because he worked in the coffee shop below my building and wanted to practice his English, a tool he later used to help translate the protest messages to the Western media. But just over a year ago now, in late January of 2014, my friend died with hundreds of others when the main building housing the protestors was torched by the Ukrainian police on the order of the government. He was a student, and 20 years old at the time, just like me.

But I am not Ukrainian. I am not even Slavic or East European. I am conveniently removed from the conflict across an ocean and behind the safe walls of the residence halls and academic buildings on this quaint and beautiful campus. So why do I care?

I would like to unpack Mr. Kundera’s thoughts on identity to answer this question. As he phrased it, our identity is “what has been created by the mind.” This means that before our identities can exist in the world we must be mentally capable of imagining what they should be. For these identities to be experienced, we must also have the ability to inwardly recognize them and outwardly express them – or as Kundera puts it – identity must be “reflected and concentrated.” It is only when we are able to sense that idea inside of ourselves and then demonstrate it through actions in our own communities that our identity is formed.

My friends in the small industrial city of Cherkasy were the first people who showed me what it was to have an idea of what something should be, and then to make it reality. They envisioned a better Ukraine. The identity they created in their minds was different from the one you would find in their lived experience of dirty side streets and run-down grocery markets. It was one where they could feel safe and had the opportunity to go to college and have a career. They shared thoughts and felt a concentrated sense of identity among each other. It was one that was reflected through their actions when they risked everything to protest. And it was one that I had the opportunity to be exposed to during my short three-month stay. Today, I can say I care about Ukraine because I saw what members of my own generation were able to mentally create and ascribe to – and that was something worth fighting for.

I chose to speak about my experience in Ukraine not only because it distinctly marks my time at Wake Forest, but also because I feel as though the lessons I learned can relate to our current campus climate and culture. Like Ukraine, Wake Forest is going through a time of transition. Throughout my Wake Forest career, several events have happened that have perhaps shocked – but have no doubt changed – our community. There has been the creation of the LGBTQ Center and the Women’s Center. Students have organized to improve the treatment of racial minorities on campus. We have hosted Deliberative Dialogues and re-seize the Quad events. Each day, more voices are coming to the table and more people are being heard on this campus than ever before in our university’s history – forcing our collective identity as Deacons to change.

We may not always agree, but by taking part in these discussions I was able to speak with and listen to other students, faculty, staff and administrators about what we wanted the identity of a Wake Forester to mean. Here, various members of our university have been able to communicate with one another to make the identity they envisioned a lived reality. Students today have already benefited from these transformations. I know I am very thankful to Dr. Boyd, other members of the Religion Department, for establishing the Religion and Public Engagement concentration. This program requires students to embrace the spirit of Pro Humanitate by having us take what we have learned into the real world. It is through this program that I was able to go to Ukraine. Reflecting on my undergraduate career now, I know that my understanding of myself and the world around me would not have been nearly as well developed without what these people worked so hard to create and their unwavering guidance and support.

The programs that make Wake so unique required a tremendous amount of work to establish and maintain. They often started with a conversation. But these discussions were only possible because Wake Forest is a community that encourages its members to create something in our minds. For me, this is an ability that is worth even more than learning how to research or conduct complicated calculations. It takes a special method of teaching and learning to feel as though you are able to constitute change in your community with a thought that originated in your mind. As my major advisor Dr. Jarrod Whitaker frequently states: “Power is the ability to define the quality of a relationship.” If this is true, then to obtain that power and effect we must be able to identify what we want these relationships to be.

When we first came to the campus during Freshman orientation we were taught about the Wake Forest identity and what it means to be a Deacon. We learned how to sing the fight song and how to roll the quad; we heard about uniquely Wake Forest experiences like Wake and Shake and Hit the Bricks. When I leave this campus those traditions will become happy memories. But what will never leave me is the ability to create something in my mind. Something that I can believe in, ascribe to, and strive for.

What distinguishes Wake Forest is that its educators have given students this skill, but that does not mean it will be an easy one to employ. There will be moments of push back, when people ask, “why now?” “Why you?” We may be told to follow the status quo, not to ask questions, to wait our turn. But like any creation, our identities can only exist if we are willing to maintain them. And like any change, our identities can only be made true if we believe in what is concentrated within us.