‘Who is Wake Forest?’ 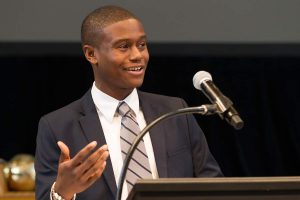 On the first floor of Carswell Hall; just before the Annenburg auditorium; there is a quote that goes sporadically noticed and seldom explored by the average student rushing to class. It is credited to Wake alumnus Ed Wilson and reads, “Long before we played football, edited publications, acted, or sang – in fact, almost before we studied, we of Wake Forest talked.” And talked we have.

Since the University’s founding, Wake has had seniors prepare and deliver orations on topics of import, from Henry Foote’s 1868 speech on “The American Republic” to Amy Gardin’s 2012 address “Don’t Give Me an Education.” However, what I always found most intriguing about that quote from our provost emeritus was his use of the pronoun “we.” To be clear, I’m not one of those nit-picky grammatical types. I’ve turned in papers full of comma splices and have gotten some of my best sleep in the back of high school English classes. But that quote, that evocation of the “we” always left me wondering, who is “we.”

No, not “who are we”, who is “we.” To pose the question of “who are we” suggests there is a normative Wake Forest self or experience from which to begin introspection. Today I’d like to deconstruct that.

Ed Wilson graduated in 1943; almost 20 years before the first student who looked even remotely like me ever set foot on campus. Only one out of the previous twelve speakers at Convocation for the past four years has been African-American. So … who is “we”?

When I think of difference and Wake I am constantly reminded of this year’s homecoming; a time when we all were to come together and celebrate the University. Excitement engulfed the campus as alumni returned. Student Union put out an elaborate, weeklong event flyer. It seemed like there was always something to do. Student groups began to host events around the clock … I didn’t go to a single one of them. With the exception of the President’s Ball and the Football game, none of the events I elected to attend were displayed on University marquees. They didn’t take place in spaces rented out by age-old organizations with well-fed treasuries and statistically speaking, the biggest racial demographic at Wake was largely absent

However when friends and family asked, I explained “we” celebrated this year’s homecoming with a series of events I personally and affectionately labeled “Black homecoming.” Thursday, there was a party hosted by the brothers of Alphi Phi Alpha, one of only three historically Black fraternities currently on campus. Friday, there was a cookout at the National Pan-Hellenic garden, known as “the plots” and that night there was the President’s Ball. Saturday, there was the annual tailgate hosted by the Office of Multicultural Affairs, and another party following the game co-hosted by my own fraternity, Kappa Alpha Psi. The racial makeup of these events was drastically different from the predominately white classes I sit in Monday through Friday.

The irony of this being homecoming is that I can all but guarantee the average white student walking across the quad that weekend had little to no clue about these festivities which I found to be so wondrous. It is a manifestation of Wake’s multiplicity of communities. The visceral reaction of some may be to think, “Well, hey, everyone should do all the same stuff together.” To be honest, statements like these make me cringe because they cut directly against what has made my time at Wake as great as it has been.

That logic is what initially made me feel perpetually out of place in Deacon Country. You see, I think difference is something to be valued. That recognizing it is a starting point for understanding and appreciation. To suggest that there is a universal “we” who must do all things together and in unison inevitably means certain groups are forced into a mold which may not fit them. My freshman year I felt as though I was constantly being explicitly or implicitly told, “adapt” “try new things” “be more like us” “dress like us” “listen to our music” “dance like us.”

Ironically, for my past 21 years to be Black in America has been to be constantly adapting. Code switching, changing, “seem less angry”, “seem less dangerous”, “seem less stupid”, “seem more articulate”, “seem like you know more about AC/DC than Young Jeezy.” This is a burden I always felt my white classmates didn’t have to bear. Yes, many students struggle to feel comfortable in their new environment, but there is a distinction between feeling different because of who you are, and being an outsider because of the color of your skin.

Now I’m neither closed minded nor hateful, but I am a rational human being. No rational human being willingly eats at a restaurant that doesn’t serve the food they like. They don’t listen to music they don’t enjoy, and they don’t watch comedies that don’t make them laugh. My point here is not that difference is universal or impermeable, but rather that we would be fools to pretend it doesn’t exist. Acting on that understanding means the strong presence of diverse options. Herein lies why the meanings of “we” in discussions of Wake are so important. How can an effective discussion about a population be had if the speakers never even stop to understand the nuances included within it? Or for that matter, the people who were always, already counted out of it?

A great man, and institution at this University, Dr. Allan Louden once said,“The fabric of Wake Forest is the collection of many communities; as neighborhoods compose a city, the varied quarters complement the whole.” My neighborhood is too small for me to have made it to where I am today devoid of contact with my fellow residents of Deaconville. From enthralling late night conversations in freshmen dorms, to heated debates in divisional classes, to awkward introductions on Friday nights, and hour-long Pit-Sits on Saturday mornings; I’ve had the pleasure of getting to know this city pretty well. But hear me with the understanding that where I work, is not where I live.

Ultimately, I think Ed Wilson’s “we” is the collection of neighborhoods Dr. Louden describes. But it’s easy to think your neighborhood is the entirety of the city if you never leave your block. I just came from across town to let you know: This place is great because we share it; and that “we” means many different things to many different people. As Wake Forest grows and classrooms diversify, the only way the University will continue to stay great is if those groups that have historically occupied its center attend to those at its periphery. To me, that means supporting institutions designed specifically for those students.

After all, our motto is not Pro-Stagnance, Pro-Legacies, Pro-Greeks, Pro-Powerful, or Pro-Wealthy. It is Pro Humanitate. And that means nothing, if not unconditionally applied right here at home. Thank you.